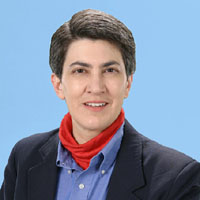 Bonnie D. Huval is a former Space Shuttle engineer and longtime business and IT consultant.

Her work for commercialisation of technical innovations requires both strategic and tactical thinking on behalf of the innovations as well as understanding of relevant existing strategy, existing systems, and business processes at client companies and appreciation of the markets they serve. She works with people ranging from the shop floor or small business to the executive suite or boardroom of global multinationals, and routinely translates between the technical and non-technical.

She was a leader on the board of directors that pulled a prominent national USA non-profit back from dire financial straits. Her reports to regional leadership explaining finances and the board’s fiscal actions were especially well regarded and were widely copied by other board members for their regional leaders. She coached her region’s push for influence during national political campaigns, spoke at local and state events throughout the region, was a guest on radio and television talk shows, and routinely met Houston television news crews for taping on a few minutes’ notice.

Bonnie is well known in the USA IT community for having people at work in WorldCom when the telecom giant’s financial problems were not yet widely recognized. While other vendors waited several months for their payments, her firm was paid on time. She is ‘a consultant to consultants’ about how to get customers to pay on time and about being a consultant rather than a contractor. To date, her books for small businesses are published in the USA. Click here to see her author page at Amazon.

As a public speaker, she tends to draw higher than normal attendance to meetings or events. A few on-air radio interview clips can be heard by clicking here.

Bonnie owns and operates businesses in two countries, including consulting firms in the USA (Seneschal Incorporated) and UK (Havenshire Limited) . She has a history of bringing projects through to success even when declared impossible.

For IT, she has worked in most roles and every phase of the software development life cycle. During earlier years as a programmer, she worked in two of the world’s most elite software development groups. Her personal roles in IT projects are now most often in leadership, project management, business analysis or software system architecture.

She is part owner of Greyhaven Realty Management Co., which has grown 20% or more per year in the face of economic downturn since its start in 2006, with accelerating growth in 2008 and since 2011. She performs some back office duties such as website management and certain behind the scenes financial activities.

She is a former owner of Lilly’s Dim Sum Then Sum restaurant in Little Rock AR but exited from that business and from commercial real estate.

She has taken many training courses and has taught courses. Her best training achievement was getting high evaluation scores from a technical class where all the students were from South Korea and only one spoke English. A good mime would have been a terrible thing to waste.

I’ve had the privilege to work with Bonnie on several occasions and have found that her integrity, professionalism, superior customer focus and attention to detail represent the standard of excellence I measure others against. At all times, she keeps the interest of her customer first. Her collaborative style insures the entire project team, business as well as technical participants, understand the plan in the context of the business objectives so that they are able to contribute fully from their areas of expertise. Bonnie’s thoroughness in planning, expert judgment and attention to detail result in very consistent project performance and her attention to detail coupled with keeping her customer’s interests first, result in well targeted solutions that consistently exceed expectations. However, Bonnie brings significantly more value as she goes beyond the project and contributes at the business level. For her, it’s not ‘deliver a project’, but it’s ‘how to help the customer make more money’. She approaches her work from the business context which ultimately insures that the maximum value to the business is achieved. I recommend Bonnie in the highest terms. You will find her to be a professional of excellence and a valuable business contributor.

Bonnie throughout the time of doing business and working together has always demonstrated a detailed approach to her deliverables, attitude and ways of working. An extremely strong individual both technical and business who would be a benefit to any organisation or service provider.

Bonnie is one of the brightest individuals I have had the pleasure of working with over the past 11 years. Her technical skills and dedication to doing the job right the first time are unmatched.

Bonnie has written custom code for us to use that has been very beneficial to our organization. She has always been willing to share any knowledge and to explain why she had to make certain changes in order for the code she wrote to work properly.

Bonnie also approaches her job and others in a professional manner. She is the type of person that you can always count on to do a good job and not have to worry about following up with afterwards. If there is an issue she doesn’t understand, she will research the problem and find a workable solution for it.

I would highly recommend her for any position she applies for because of the knowledge and dedication she brings to an organization.

Bonnie has great customer skills working in a very diverse environment. Many groups at Du Pont worked together on projects and she was consistently the go to person for straight answers and driving any issue to closure.

In life you occasionally meet game changers. I have NEVER met someone as experienced and adaptive in the consultancy world. Bonnie is truly world class. Intellectually she breathes the air of the highest corporate boardroom execs on this planet. Her thought process is second to none. If you need seismic change look no further, as she will deliver and integrate at all levels in a clear and concise manner.

Pleasure to Work With

I have known Bonnie since 2011 through networking events. Bonnie’s experience and technical knowledge is incredible and her personable approach makes her a pleasure to work with. I would thoroughly recommend Bonnie to anyone as they would be getting a great person to work with.

Focuses on the Challenges

Bonnie is a professional consultant who focuses on the challenges faced to provide detailed and technically advanced solutions. I would use her again without hesitation.

Fantastic to Work With

I’ve had several opportunities to work with Bonnie on different projects. She is fantastic to work with. She is very detail oriented, hard working, and manages her work to consistently complete deliverables on time. I’ve recommended Bonnie for other positions at MCI (now Verizon). Bonnie, thanks for all the projects you have helped with. I hope we have the opportunity to work together again.

I have had the opportunity to work with Bonnie for the past three years. She has helped with implementing growth ideas, ways to promote and market Greyhaven Realty and mentor me in the growth and success of Greyhaven Realty.

If you are looking for a detailed, out of the box thinker, Bonnie is the person you want! She is a very detailed, organized, person who always does what she promises to do.

Her book “Get Paid” is a very good resource for anyone who works in customer service. She is so willing to teach others from her own experience.

If you have an opportunity to work with Bonnie, you will be very fortunate to have her on your team.

Bonnie and I have been members of the Independent Computer Consultants Association. Bonnie took on the task [in late September 2009] of organizing a group to create the book “Born to Stand Out – tips to becoming an excellent computer consultant”. She made sure that the deadlines were met, edits were handled, and the book was ready for the November 2009 conference. With the ICCA closing the end of 2009, she has now agreed to take the ownership of the book so that we can continue promoting this information to consultants. She has done an excellent job in this volunteer opportunity.